New Jobs for the Trucking Industry?

In a previous blog post, we discussed how some in the transportation industry are hesitant about what automated technologies will mean for trucking jobs. Will they completely nix the need for truck drivers? While some truck drivers are worried that they may be out of a job in the future, others are excited about the potential changes such technologies will bring to the transportation industry, like new jobs. 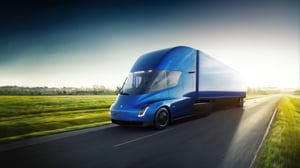 One such technological initiative is a new program that plans on hiring truck drivers to help “teach” automated trucks the rules of the road. A program created by self-driving truck startup TuSimple, will certify truck drivers to become autonomous vehicle drivers and operations specialists. TuSimple is currently partnering with Tucson’s community college for the certificate program with intentions to roll the program out nationally. Graduates of the program will then get priority for jobs at TuSimple’s development center.

Even though all this may sound promising in that truck driving jobs won’t become obsolete altogether, some traditional truck drivers may be reluctant to accept this role change. After all, if a great truck driver’s talent is constantly being able to anticipate the “what-ifs,” won’t automated trucks prevent the driver from being able to use this talent on the job since the truck will be able to anticipate the “what ifs” itself?

To some truck drivers, automated technologies may take the joy out of the job. This is something that automated truck startups will need to take into consideration as it might mean they’ll have a harder time recruiting traditional drivers into their programs than anticipated.

Regardless of whether you’re one who is excited about the potential of these new jobs or hesitant about them, the main point to be made is that it seems as if the traditional truck driver role won’t be disappearing, but rather, evolving in the coming years.

We strive to build a long-term relationship with every carrier we work with, and we believe that together, we can achieve excellence! Not yet a carrier with IEL?